If you’re like many retirees, your Social Security checks will account for a large portion of your retirement income.

But how well you understand the ins and outs of these benefits could make a big difference in how much you receive over your lifetime.

To that point, 69 percent of baby boomers — a generation of individuals who are either in or approaching retirement — expect Social Security to be a “major” source of retirement income, according to a recent report from the Insured Retirement Institute.

In contrast, just 28 percent of those surveyed expected employer pensions, the next source of major income, to provide a main chunk of their retirement pay.

Click on the chart from the Insured Retirement Institute below: 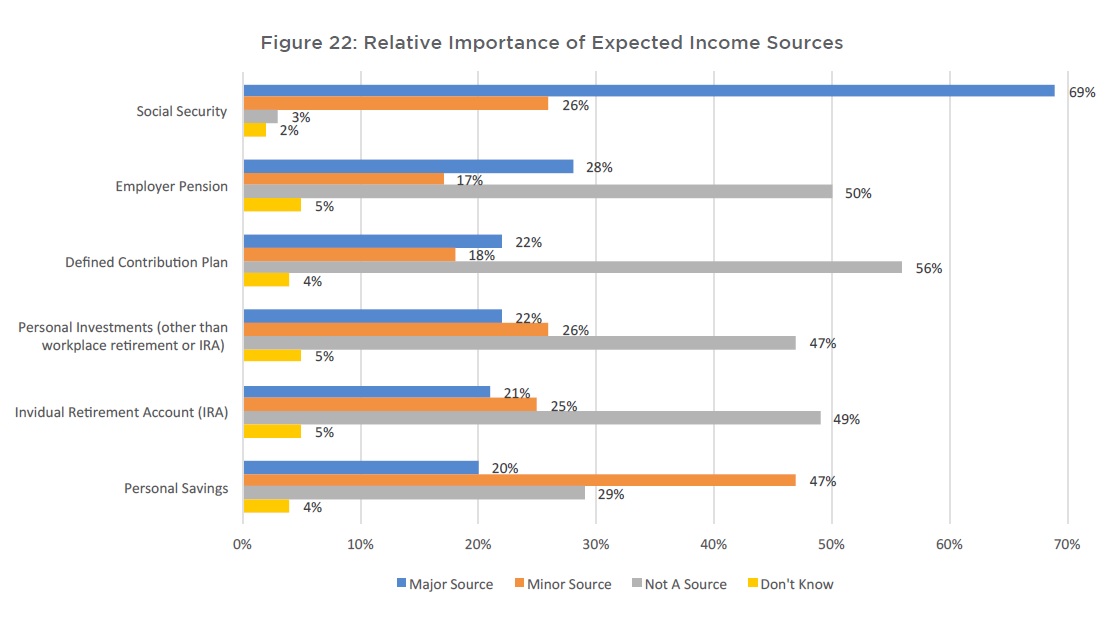 Still, many of the individuals making these decisions don’t have a full grasp of Social Security benefits.

Here are some of the top myths financial experts consistently see.

A typical couple will receive more than $1 million in Social Security benefits over their lifetime, according to Christopher Jones, chief investment officer at Financial Engines, a provider of financial advice and asset management. That exceeds how much most people are able to save on their own.

“Chances are, Social Security is the most valuable retirement benefit that you have,” Jones said.

And to get the most value from those benefits, it pays to wait.

You cannot collect 100 percent of your benefit until you reach your full retirement age — 66 or 67 for most, depending on the year in which you were born. And your benefits increase by as much as 8 percent per year for each year you delay collecting, up until age 70.

By starting benefits at age 62, you’re agreeing to lower checks for the rest of your life.

Unless you’re going to live for a shorter amount of time than the average person, you should delay your benefits, Jones said.

Myth: You have to claim benefits at retirement

You do not necessarily have to start taking Social Security benefits when you retire.

“You could retire at age 65 and still delay the onset of Social Security until 69 or 70,” Jones said.

But take note: It does not pay to delay beyond age 70, because your benefit will no longer continue to grow.

“The Social Security decision is driven in many, many ways by life expectancy,” said David Freitag, a financial planning consultant and Social Security expert at MassMutual. “There needs to be some rational thought behind that.”

Do some research around your family health history, lifestyle and personal medical history, Freitag said.

And don’t confuse key age thresholds that affect you.

Age 65 generally is the deadline for when you have to decide on your Medicare coverage (exceptions apply). But that is not the same as full retirement age as defined by the Social Security Administration.

Your marital status should play a big role in when you decide to take benefits.

If you are married, starting benefits earlier will also reduce the potential spousal or survivor benefits your husband or wife will receive.

Delaying claiming benefits until age 70 could result in as much as a 40 percent to 50 percent increase in benefits for surviving spouses, according to Jones. Meanwhile, the average length of widowhood is 11 years, he said.

“It’s much more likely that one spouse is going to live for a substantial amount of time without the other,” Jones said.

If you were born before Jan. 2, 1954, and are full retirement age, you can take a spousal benefit and allow your own benefits to grow. Then you can switch off to your own, larger benefit later.

Those who were born after that date, however, no longer have the ability to employ that strategy, because of changes to Social Security rules made by Congress.

Divorced spouses may still be able to collect benefits on their ex’s work record, provided they were married for at least 10 years and are at least 62 years old. But if you remarry, you will no longer be eligible for those benefits.

Myth: You can figure this out on your own

The difference between a good and bad claiming decision can mean a difference of $250,000 in lifetime benefits for a single person, according to Jones.

A shortfall worth thousands of dollars can come from just moving a couple of assumptions regarding your retirement, said MassMutual’s Freitag.

“It’s not hard, but it’s something that requires attention,” Freitag said. “The big mistake is asking Uncle Harry at the family picnic about what he did and then doing what he did.”

Myth: You can’t change your mind

If you make a claiming decision you regret, you have up to one year to change your selection.

“That one-year window is pretty easy to make a change,” Freitag said. “It’s almost impossible to do anything dramatically different after a year.”

Reversing your decision could mean reimbursing the Social Security Administration for extra money you received. But keep in mind that you could be reaping thousands of dollars in extra benefits if you decide to delay your benefits instead.

Your Social Security benefits are based on your highest 35 years of earnings.

If the Social Security Administration does not have a correct record of what you have earned, that will affect those calculations.

You can request to change those records within three years, three months and 15 days from the end of the taxable year of those wages.

You should be tracking that record even if you’re nowhere close to retirement.

To do so, create an online account with the Social Security Administration.

admin
Recent Posts
Copyright CLF Asset Management. All Rights Reserved © . No client or potential client should assume that any information presented or made available on or through this website should be construed as personalized financial planning or investment advice. Personalized financial planning and investment advice can only be rendered after engagement of the firm for services, execution of the required documentation, and receipt of required disclosures. Please contact the firm for further information. Registration with the SEC or state regulatory authority does not imply a certain level of skill or expertise.Additional information about CLF Asset Management, Inc. is also available on the SEC’s website at www.adviserinfo.sec.gov. ADV Part 2 Brochure | Lion Tree Group Site Design